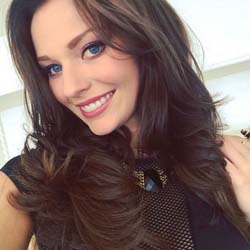 Russian actress Irina Baeva, who first starred in a soap opera, confessed to be living the dream of her life with the opportunity she was given by José Alberto Castro in “Vino El Amor“.

The young native of Moscow lives in Mexico since 2012 and has participated in soap operas “Italian Girl Comes to Marry” and “Passion and power“, the latter also produced by “El Guero” Castro.

“The truth is I’m living a dream, a dream that began watching a Mexican soap opera called “Teresa“, which coincidentally by Mr. José Alberto Castro, with whom I am working. It amazes me how life gives you this kind of thing, I would thank God or higher power, or whatever you call it.”

Speaking about her first role she excitedly shared what closely identifies her with her character, because both suffer from the absence of a family.

“It’s a character who lives alone with her father, he is her only family and personally am a woman who lives alone here in Mexico, my family is in Russia and the pain of not feeling them, that absence, I identify a lot with ‘Luciana’ because that absence is precisely what builds the character to move forward.”

About how she came to Mexico, the blue-eyed actress said that it’s simply because when she was younger she always interested in Latin cultures.

“In Russia I started studying Spanish since childhood, I discovered that it is a language that I love and I love to speak it, and to try to learn it I started to see Mexican soaps. Since I was little I loved the Latin world, because it is a totally different reality to what exists in my country, starting with the climate and its people.”

She added that there was born a curiosity to know that world and finally in 2012 came the opportunity to travel and come to Mexico.

“I dreamed of walking the streets I saw in soap operas, get on taxis, live in these houses, I wanted to live that world, so I put together a whole plan to reach the CEA Televisa and they helped me with immigration papers. Arriving in Mexico I went to the acting school, because besides always wanted to study acting, and the best part is it was free.”

Irina, who is fluent in Spanish, said the first thing she did was perfect her Spanish, because if she wanted to take part in soap operas, she had to communicate very well in our language.

“Since I arrived I worked hard to get rid of my Russian accent, because otherwise no one would believe that I could play a Mexican.”

She added that her family, in the distance, is happy with her accomplishments and she hopes to bring her parents to know the country their daughter fell in love with.

“I hope to get them here soon, a year ago my sister came with her husband and loved Mexico, they are already making plans to return. My parents have not yet come, I hope soon because I want to first teach them some Spanish and culture of this country, and I’m sure at some point they will come.”

Finally, Irina Baeva said this about how to deal with stardom and popularity.

“The fame and popularity is part of this, and we can not avoid, like it or not.”

“Fame has very nice things like people’s love, even from countries that we do not know, and it also has negatives, like gossip or speculation but it does not bother me, because I really know what I’m doing in my life and as I know that these things are part of this package, it doesn’t overwhelm or affect me.” She said.

Your amazing Irina … I love your confidence in what ever you you do and nothing worries you at all. This Along came love has really taught me a lot. Keep up the good work and love at this. Lots if love….

Your really Good an i love the way you act big up dear. And i love spanish too one day i will study that its my dream… Am from Kenya

You have developed into a great actress and no doubt we will be seeing you on the silver screen. I’ve seen you on two novelas. Keep up the good work.

I love seeing you in novelas. I saw u first on passion y poder. Muchacha italiana and now in vino de amor. From South Dakota USA.

I really love you as actress

She is just so lovely, I watched her in Passion & Power. Very attractive and gorgeous.