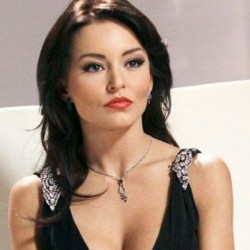 Angelique Boyer is doing an incredible job personifying triplets on “Tres Veces Ana.” Univision had the privilege of premiering the telenovela worldwide, before its country of origin in México. However, Latino audiences in the U.S. seemed to be getting gypped out of the full experience that this drama series is.

During a Facebook Live session, Boyer invited her fans to get a peek behind-the-scenes of the production. She was filming a scene with Olivia Bucio and expressed her admiration for working with her. Bucio said that she has been trying to watch the telenovela in México, but she has not found a way to do so as Univision doesn’t broadcast in those territories. Angelique told her she would have to wait for it to air in their country and then we were shocked by what she said next.

Boyer said that Mexican audiences would get the full experience of “Tres Veces Ana” once it airs in México. “They will tell it better, fortunately, because they will have more time to see it,” she said. “The episodes will be more complete. I have watched some scenes and they are edited too much that I don’t think [viewers] can be enjoying in the same way. It’s frustrating, but well, that’s how things are.”

Univision aired two-hour episodes during the premiere week of “Tres Veces Ana.” As viewers, we thought we were getting the full experience and getting double dosage of telenovela. It seems like we are getting cheated out of seeing the original version and as U.S. audiences, we are receiving a watered down version.

This is not the first time someone complains about the Univision scissors going rampant. Producer Carmen Armendáriz also mentioned that “Yago” is being severely edited. There was a character, that was completely cut out of the series and did not make sense once she appeared in later episodes because her introduction was edited out. Also during Premios TVyNovelas 2016, there were major awards and performances that were left on the cutting room floor. Watch Boyer air her frustration below and tell us what you think!