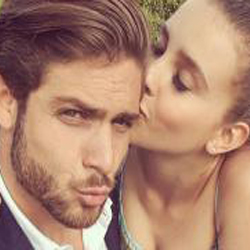 Horacio Pancheri and Paulina Goto are not only the stars of the hit telenovela “Un Camino Hacia El Destino,” they are also in a relationship outside of the small screen. The actors spend a lot of time together sharing the leading credits of the production and often share their romance with their fans. Pancheri and Goto are extremely active on Instagram and showcase their love affair to the world. Check out their sexy photos below!

Goto and Pancheri made their romance official on the social photo sharing network about two weeks ago. “To our friends, our fans and everyone that doesn’t miss ‘Un Camino Hacia El Destino,’ we want to share that we are in a relationship and we are happy,” Goto captioned a pic on Instagram. The photo showed Goto and Pancheri together sitting with a cute little puppy. Prior to the announcement there were many rumors that they were together, but nothing was confirmed until they both made it official.

In “Un Camino Hacia El Destino,” Goto plays Luis Fernanda. Her character grew up in a modest home, next to Amelia, her mother, and Pedro, her stepfather, who has been a great support and instilled the love for flowers in her. She is kind, honest  and openhearted. Even though she never had a formal training, she plays the violin extremely well. Her dream is to study the instrument properly and become a great violinist. She falls in love with Carlos and she will pursue her happiness next to him facing all kinds of obstacles. When she discovers Pedro is not her real father, it will be a big shock for her that will make her life take a new twist.

Pancheri gives life to Carlos, a talented physician. He lost his father and disagrees with his mother’s new husband, Luis, because he knows he is only benefiting from her and her money. He falls in love with Fernanda the moment he meets her, so he decides to play fair with his girlfriend, Isabela, and end their relationship. Things do not turn out so well, though. His integrity makes him do what is right all the time. To him, family and love should always be strongly protected.