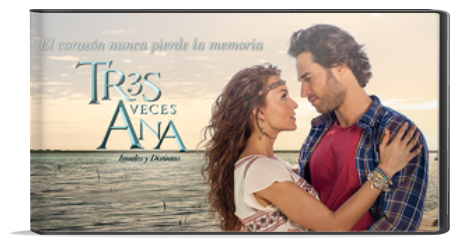 Original Title: Tres Veces Ana aka Tr3s Veces Ana
English Title: The Three Sides of Ana
Language: Spanish
Subtitles: English
Genre: Drama, Thriller
PLOT
Tres Veces Ana: Ana Lucía, Ana Leticia, and Ana Laura are identical triplets with very different personalities. Their parents died in a car accident when they were younger. It was believed that Ana Lucia had died. Soledad Hernández, who was suffering from the loss of her young daughter, Ana Lucía and is raising as their own even discover who she really is. Several years later, Ana Laura is a sweet girl who wants to find her missing sister but has been without a leg since the accident. She falls in love with Ramiro, who will have to overcome many obstacles to make love.
Ana Leticia is different, she is glamorous, selfish and capricious. She always wants to be the center of attention, especially with her grandmother, Ernestina, and her uncle, Mariano, guardian of the twins. Ana Leticia is allied with Iñaki, who becomes her lover and accomplice in many of his villainy. When Ana Lucia and Soledad come to the city of Mexico, Ana Lucia falls in love with Santiago, a taxi driver who does not remember anything about his past after losing all memory. Blood ties will eventually join the sisters, interweaving their lives in an unexpected way.
EXTRA INFORMATION

Tres Veces Ana: Over a road trip, triplets Ana Laura, Ana Leticia, and Ana Lucía, along with their parents, suffer a dramatic accident crashing by the side of a river. The consequences of this event are catastrophic: Both parents die, Ana Laura loses one leg, and Ana Lucía, unconscious, is dragged by the river’s flow. Only Ana Leticia, who actually caused the accident, emerges unscathed.

Soledad, a woman who was seriously hurt after her daughter’s death, helps Ana Lucía, whom she finds agonizing. Although Soledad discovers who the girl is, she takes advantage of her memory loss regarding the accident and her family and decides to keep her, making her believe she is her mother.

Despite everyone declares Ana Lucía is death, Ernestina, the triplets’ grandmother, and Ramiro, their uncle, don’t give up and do everything they can to find Ana Lucía. But years go by, the same as their wishful thinking to find her.

Ana Laura is the only one who never loses hope to recover her sister. She has turned into a beautiful young woman with a good heart, but also solitary due to her disability. Ana Leticia, on the other hand, is an extortionist and ambitious woman who doesn’t want her sister back at all, as this would mean splitting her inheritance as well as the love and attention of everyone around her, including her uncle Ramiro, whom she loves in a sick way.

Marcelo, Ana Leticia’s husband, is a private detective who is about to find Ana Lucía, so greedy Ana Leticia hires some one to kill him and solve the problem all at once… But although he loses his memory, Marcelo survives the attempt of murder. Then, a woman helps him and gives him a new name: Santiago.

Without knowing it, Ana Leticia’s actions put her husband’s destiny together with her lost sister’s.

Santiago has some recurring dreams in which a beautiful woman appears and even though he doesn’t know who she is, since he doesn’t recall his wife Ana Leticia, he recognizes Ana Lucía immediately as the woman in his dreams when he meets her.

Soledad knows she might go to jail for keeping Ana Lucía away from her family and as she knows who ‘Santiago’ is, she tries to keep him apart from ‘her daughter’, but destiny puts the pieces in place to have the triplets meet again, except that, ambitious Ana Leticia’s unexpected reaction will force Ana Laura show her character to confront her, while Ana Lucía will be compelled to recover her place and fight for Marcelo in order to be happy.

“Watch it and share it with your friends guys 😉 .”

pls when will be uploaded the 15 episode?thanks

It’s ready but I can’t post it now because of few issues, it will be posted in 8 to 9 hours.

Is it episode from yesterday (15), right? N today will be aired episode no 16? I’m confused right now.

Days are different because of time difference between countries, better just say episode 15 will be uploaded in an hour and 16 hasn’t been aired yet (I think it will air in about 4 hours) if they don’t change the schedule.

N u guys. Where are u from if u don’t mind asking u?

When episode 15 will be uploaded?

It’s ready but I can’t post it now because of few problems we’re experiencing, it will be posted in 8 to 9 hours.

Sorry Wikipedia said different so I thought there was more than 15!!! Haha thanks though 🙂

No worries 🙂 , Wikipedia and some other sources have different order from us, the first 5 episodes were aired as double episodes (more than one hour duration), we count them as one episode, instead other sources count them as 2, so that’s why the difference, we preferred to go with the order by the production company.

If the episode airs today, will it likely be uploaded tomorrow ?

kudos to you and your partners 🙂

Mind my ignorance, I just found out that the next episode will air tomorrow. Shall we say that it would be uploaded a day after it airs ?

Probably, we usually post it within 24 hours after airing but that also depends on the how fast our source can get us the subtitles so this is not a promise 🙂 .