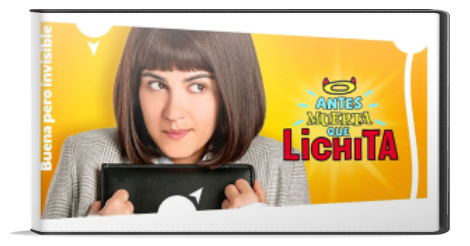 Original Title: Antes Muerta Que Lichita
English Title: Anything But Plain (I’d Rather be Dead Than Plain)
Language: Spanish
Subtitles: English
Genre: Drama, Comedy, Romance
PLOT
Lichita (Maite Perroni) has been working at Iconika Ad Agency for 10 years but feels undervalued and invisible. She decides to make a change and transforms herself from the office “whipping girl” into the empowered Alicia. However, no climb to the top is ever easy and, along the way, she faces situations that test her character and values.
EXTRA INFORMATION

In order to be Alicia, Lichita had to be smarter than anyone else and learn that no matter how hard you try to pretend to be what you are not, it is impossible to betray the heart and quit what matters the most in life: true love.

Lichita Gutiérrez is the most ignored and humiliated employee of Icónika, Latin America’s most important publicity agency, a company she joined as an assistant with the illusion of growing little by little, but the truth is that she has been stuck in the same position for years being a kind of ‘jack of all trades’. She has considered quitting several times, but she just can’t let her parents down.

Despite it all, Lichita fantasized with the day when love would come to her life and get her out of her dull existence. But that dream fades away day after day as reality always finds the way to severely put her feet back on the ground. Nobody will ever pay attention to her, not because she is ugly, but because she is so invisible and uninteresting. So, she has restricted the love ideas only to her fantasies and channeled all her efforts into a job that didn’t really fulfilled her expectations either. And the thing is that, in a company where ‘good person’ is synonym of stupid, everyone took advantage of Lichita’s kind and shy personality to assign her tasks that she really didn’t have to do.

But for the first time, Lichita is willing to become noticeable, and after she learns that Sandra, Icónika’s cold and severe Director, urgently needs to present an entire publicity campaign, Lichita gets down to work.

This is how, Lichita develops an original project, and in order to show it to Sandra, she will sneak into an exclusive party to which she, obviously, wasn’t invited. But before getting to show her project to Sandra, Lichita meets handsome and charming Roberto Duarte, a freeloader who hides a tough childhood and the bitter experience of being imprisoned for a crime he didn’t commit behind his seductive smile. To her big surprise, this apparently dream man, steals her heart… and her project, and presents it like his own to Icónika’s board of directors. Roberto gets a very good job in the company, which infuriates Lichita, but she ignores the reasons that led Roberto to give her such low blow.

Lichita goes through all kinds of humiliations, mockeries and bullying from Icónika’s employees, but the worst thing is that she must deal with the abuse from Luciana, the arrogant and conceited niece of the agency’s owner, who recently arrived in Mexico, who gets a better job than Lichita and also plans to keep Roberto’s love.

Tired of being ‘Lichirella’ and immersed in a whirlwind of emotions, all her years working at Icónika pass in front of her eyes in a flash… years in which, perseverance, honesty and hard work didn’t take her anywhere and in which the illusion of true love is nothing but that: an illusion. Lichita decides to change and recover this way what belongs to her, so if she needs to do the same tricks they did to her in order to go far and win the recognition she deserves, so she will. She decides to leave Lichita behind to become Alicia and she will even fight against her own nature, with the clear idea of being: Anythin but plain!

To be honest I was not too fussed about getting this Telenovela but after watching the first two episodes I see why everyone speaks highly of it, I was not expecting it to be that fun & entertaining but I see now it’s even more than that, if you are like me & have doubts about it, watch the first episodes & I promise you will be hooked ;).